Over the years I have fallen in love with slow, deliberate photography. The Leica M rangefinder is possibly the best camera around for such a thing. I use a Leica S2 which forgoes the classic manual focus design of the M in favour of a modern autofocus capable DSLR body. The autofocus of the S2 is the most accurate I have ever used in a camera. However, accuracy does not take into account the fact that any autofocus sensor is looking for a point of maximum contrast in an area which may be larger than the point you are trying to focus on. When shooting with a shallow depth of field, it is all to easy to end up focused on a subjects ears over their eyes, or to end up focusing on a branch when you wanted a leaf. In my line of work, accuracy is always more important than speed.

Enter the Microprism focusing screen. The concept is simple; A split-prism in the center of the viewfinder replaces the standard crosshair. Surrounding the split-prism is the micro-prism, which is a very exciting tool. Here’s what it looks like; 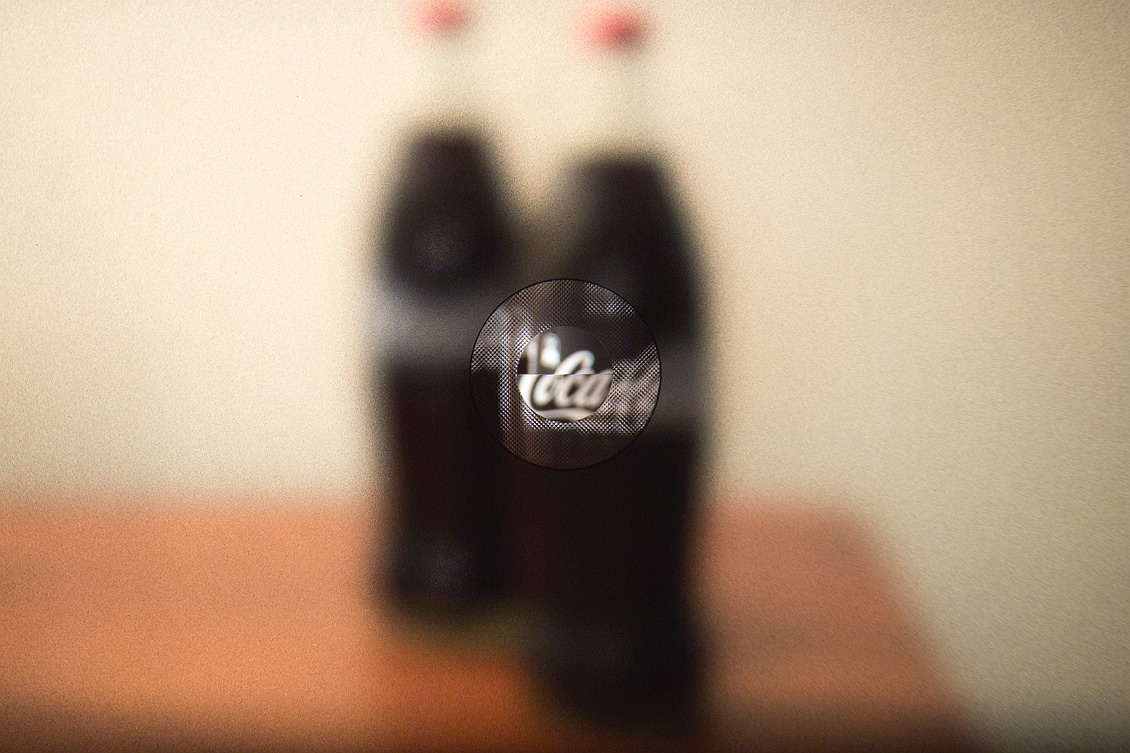 Installation of the Microprism focusing screen is simple. The package includes a small tool for ejecting and pulling out the old one, along with a brush to deal with any dust that might get in the way. Since I was picking this up at my local Leica Pro dealer, PRA Imaging, they helped me with the initial installation. The photo below shows the kit, however the screen inside the case is the standard screen. I was too excited to take photos prior to installation. 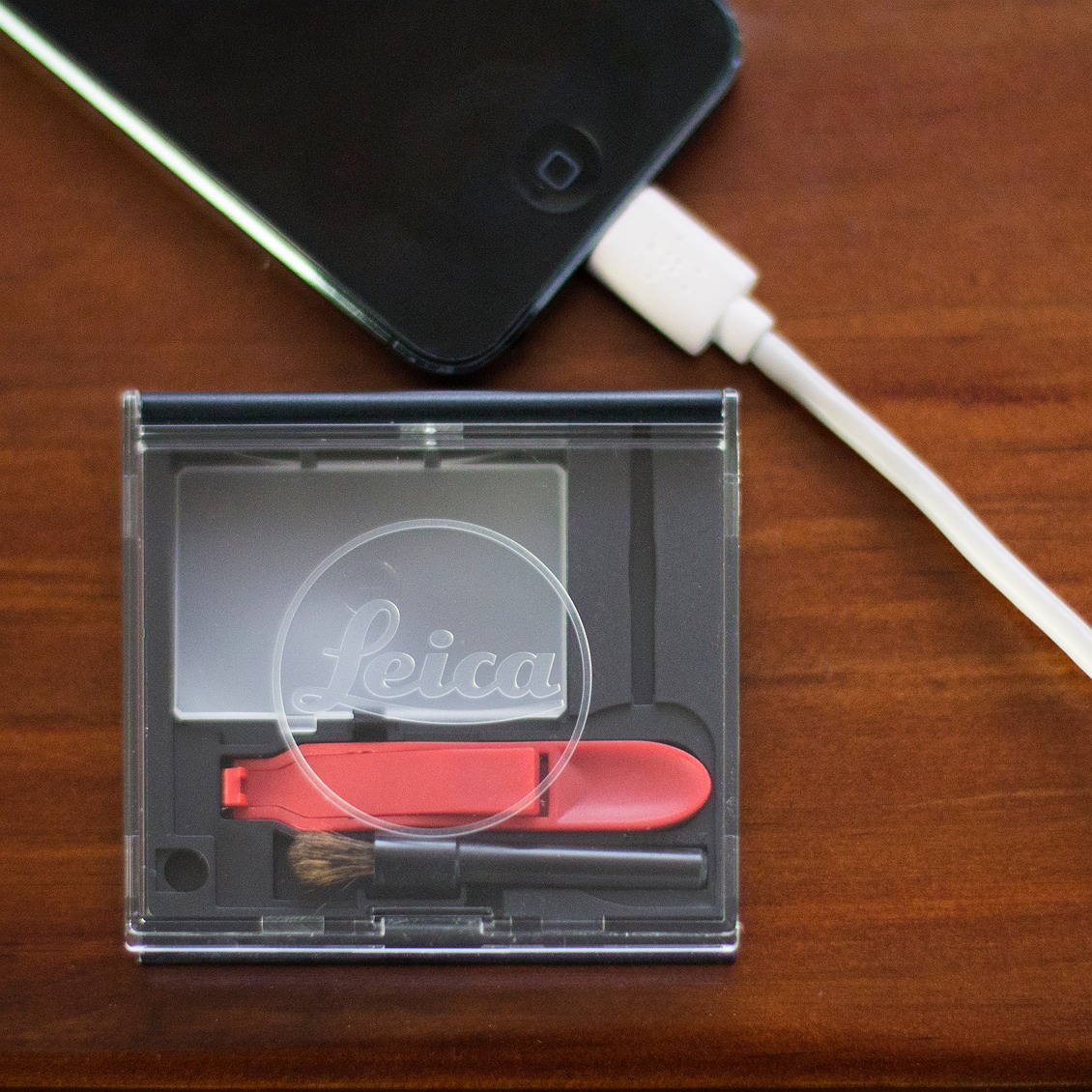 One of my concerns about relying on the focusing screen was whether the tolerance in the design of the viewfinder vs the sensor allowed for an accuracy that was acceptable. I conducted the following test.

The split-prism offers a manual focusing style similar, but still different to the Leica M. A vertical line will appear split in two when out of focus. Adjusting the lens to be in focus will bring the two parts of the vertical line into alignment. Just like in the rangefinder, you don’t necessarily have to be able to see that the line is perfectly in alignment. If you are focusing the lens back and forth from behind the subject to in front, you will get a feel for where the center of that movement is. It’s a technique that you learn to do quickly.

Where the split-prism differs drastically from the M’s rangefinder is in what the very hard edge allows. When perfectly in focus, the center of the split prism disappears. If you are even slightly out, the slightest bit of texture in your subject will make the center of the split prism stand out as the camera naturally moves with your hands. When I was down at the beach, this was obvious in the very fine texture of smooth white beach sand. A single bright grain of sand has an obvious shift in its position horizontally as it passes from the top to the bottom half of the prism.

The photo below shows the viewfinder of the S2 (as captured by an EOS-M). I have attempted to focus on the center of the Coca-Cola logo using just the split-prism. If you look to the far left, you can see a slight distortion created by the micro-prism surrounding the split-prism. Remembering that the coca cola bottle is a cylindrical object, it would make sense that the edge of the logo is behind the plane of focus. In this way, both the split-prism and the micro-prism are used together to achieve and confirm focus. 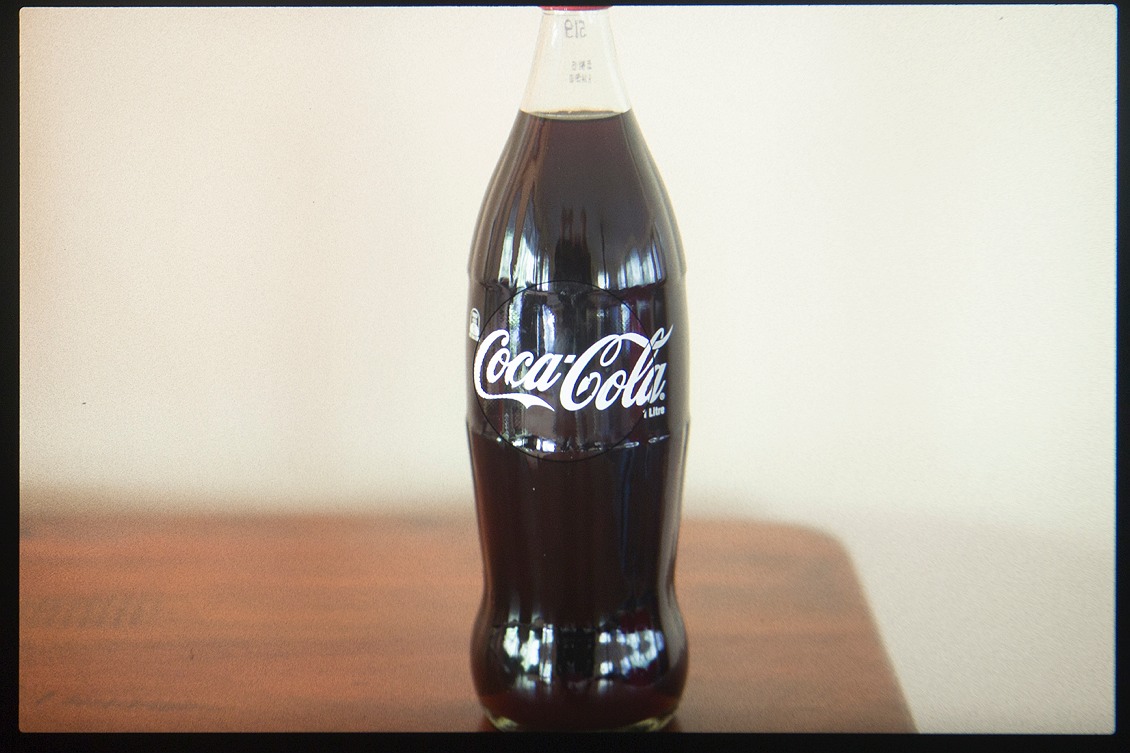 Here is the photo straight out of the Leica. 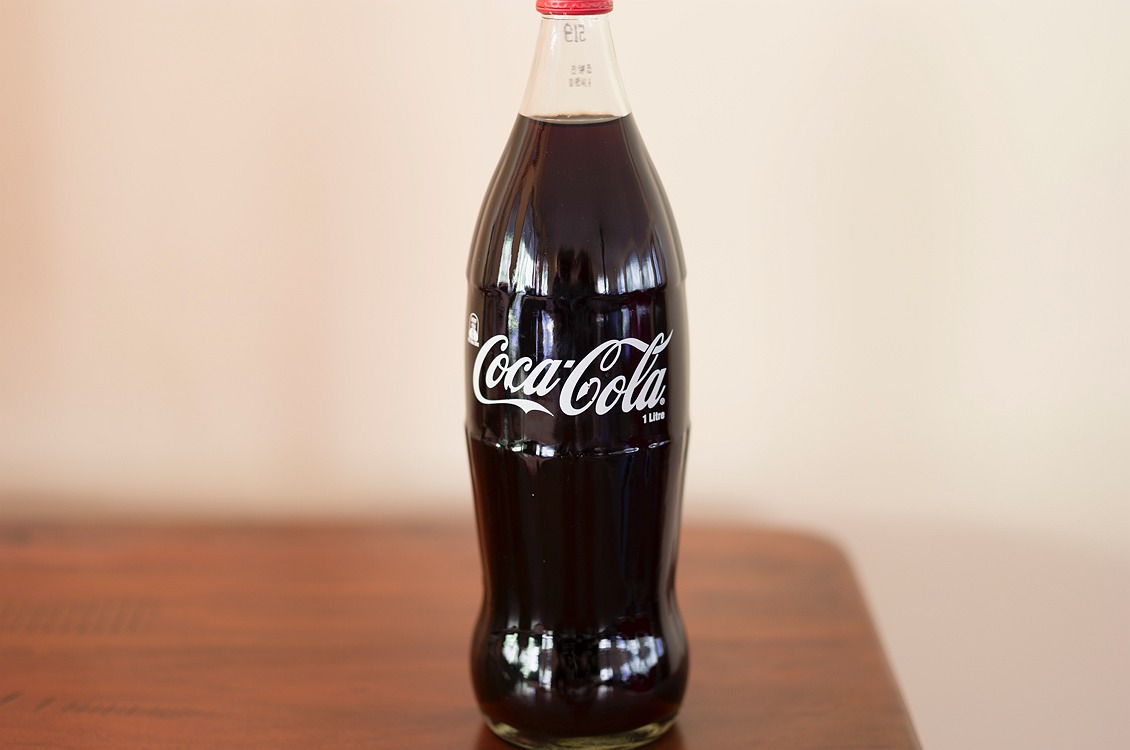 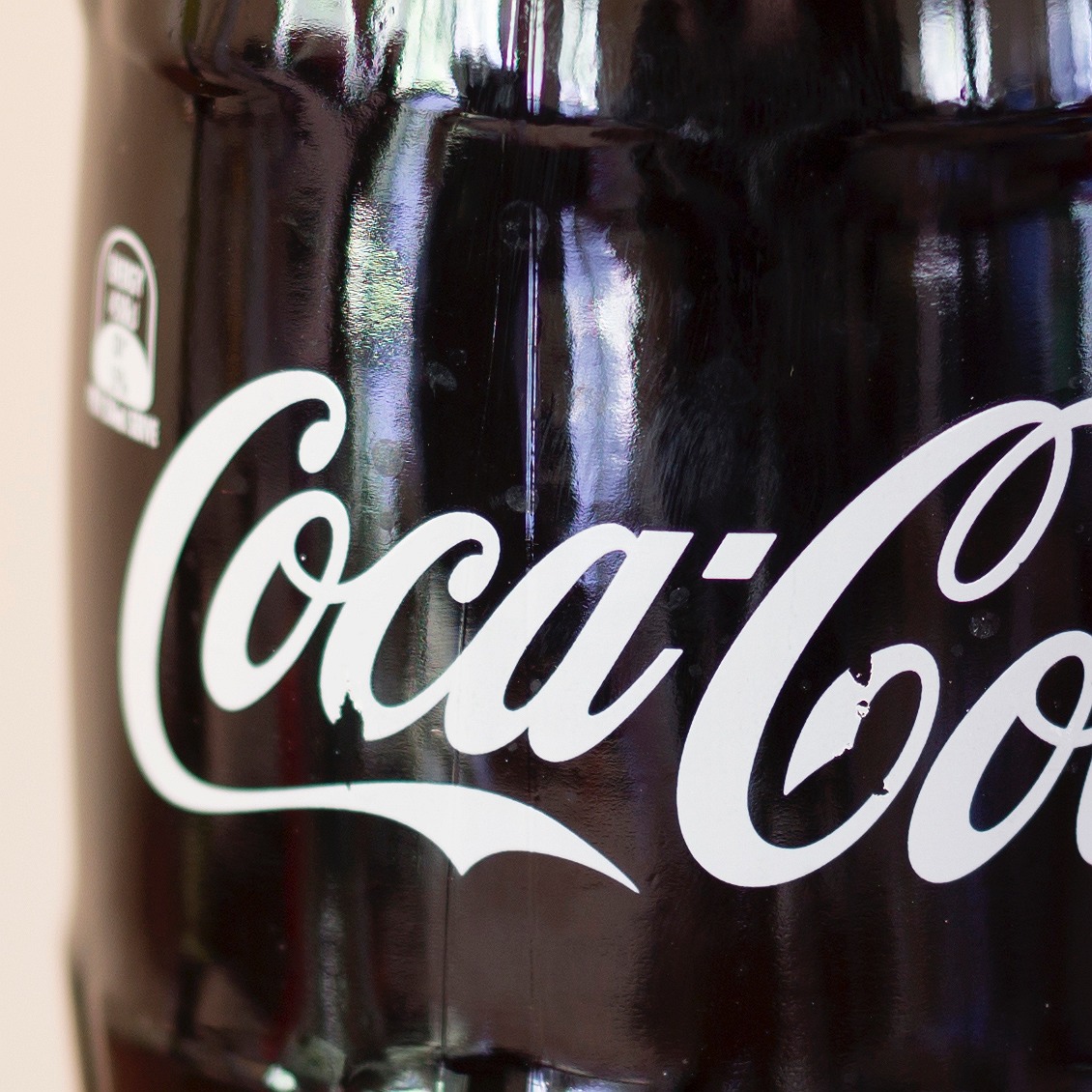 That is perfect. Using the micro-prism focusing screen I was able to focus exactly where I wanted using an extremely shallow depth of field. The camera is looking down on the bottle, so you will notice the plane of focus being cut through the bottle on an angle. The center of the plane of focus sits exactly between the C, the A, and the tail of the first C.

The next step in the test was to see how the accuracy of the micro-prism compared. I adjusted focus on the lens until the left edge of the logo appeared to be in focus. You can now see the center of the split-prism appear as a slight cut through the text where I focused previously. here’s the viewfinder; 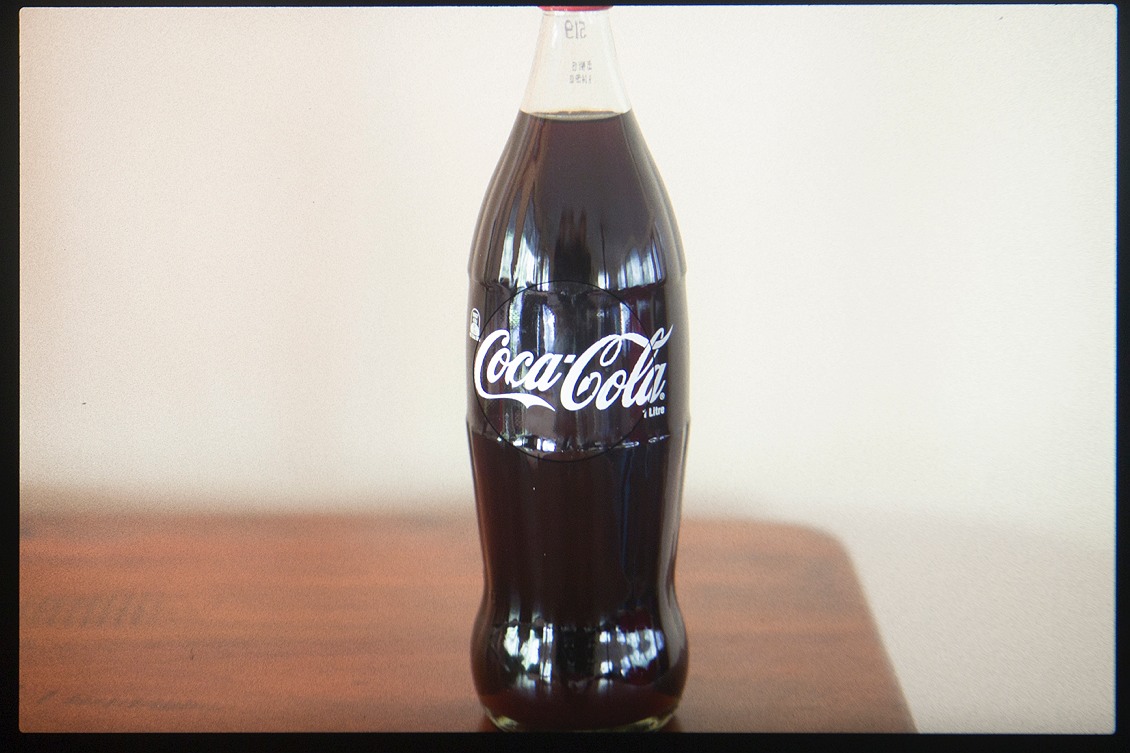 And the photo straight out of the Leica. 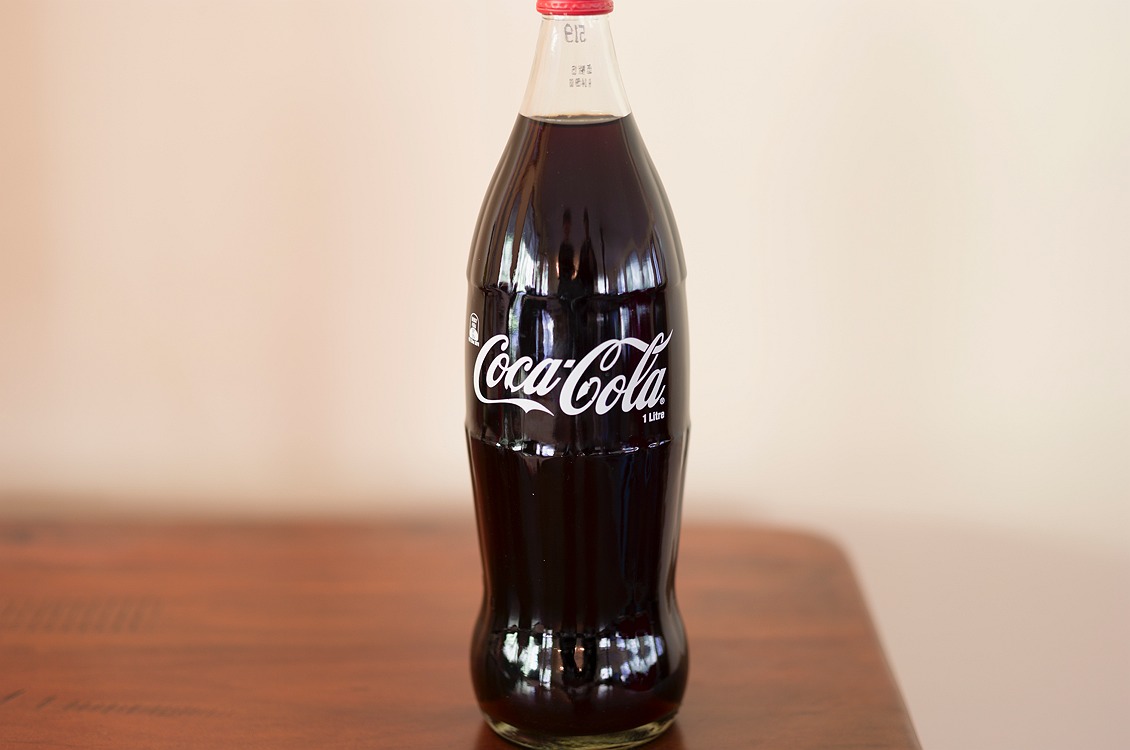 And the crop. Once again, focus is exactly where I wanted it. Remembering the tilted plane of focus, it runs through the center of the C, up through the energy content disclaimer and down under the Coca-cola logo to the right. 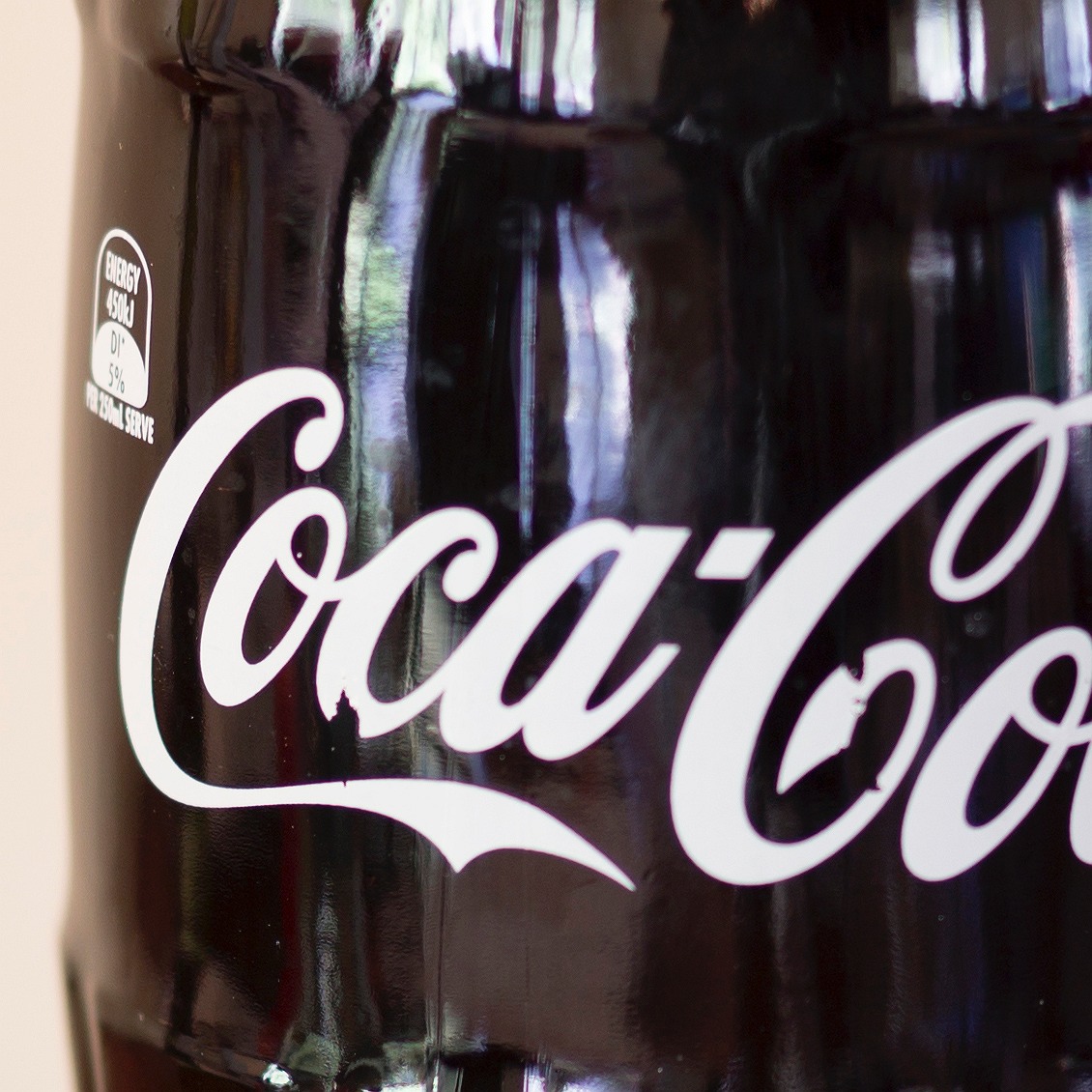 This confirms that the tolerance on the design and build of the Leica viewfinder relative to the sensor and the position of the mirror is perfect. Using the Micro-prism focusing screen will be equal to or better than the accuracy of the autofocus sensor.

It is important to remember that the viewfinder exists in parallel to the autofocus sensor, in the design of the camera. Installing the Micro-prism does not affect the cameras ability to use autofocus. If you do intend to use autofocus, the split-prism can give you a bit of confidence knowing that it has focused where you wanted it to.

As soon as I had the Micro-prism focusing screen in the camera, I headed to a beach to test it out. One of the less than obvious uses for the focusing screen is choosing where to focus in the first place.

The image below is a scene in which stretching the depth of field out amongst the foreground and the horizon requires the point of focus to sit nicely on the hyperfocal distance of the scene/lens combination. Using the Microprism focusing screen, you can make in-the-field measurements by comparing how the micro-prism responds to different focus distances. For example, if you were to make a guess and focus the lens, you can then check the foreground and the horizon and compare how out of focus they are. It quickly became a very successful technique for achieving hyperfocal distance without the guesswork. 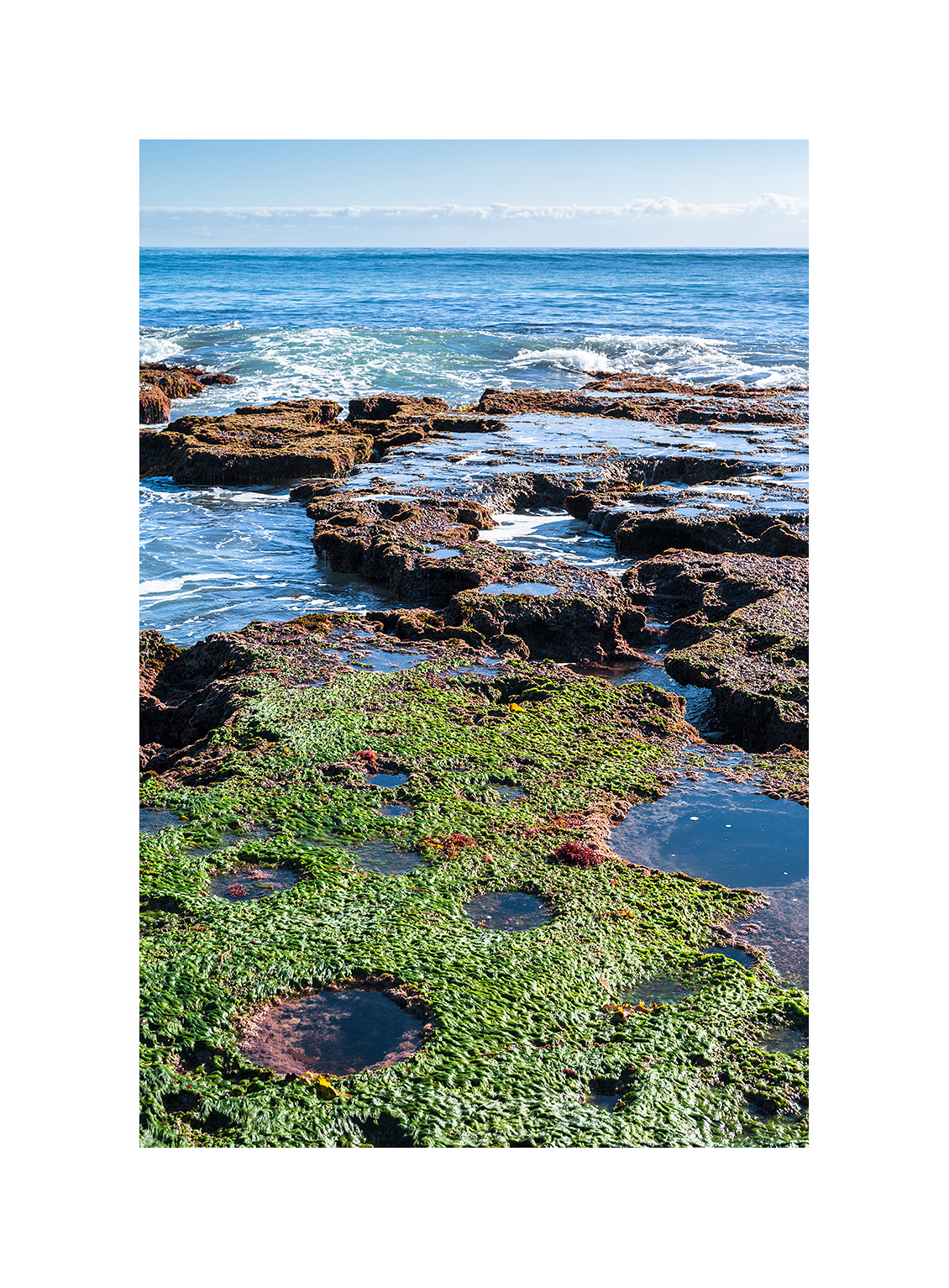 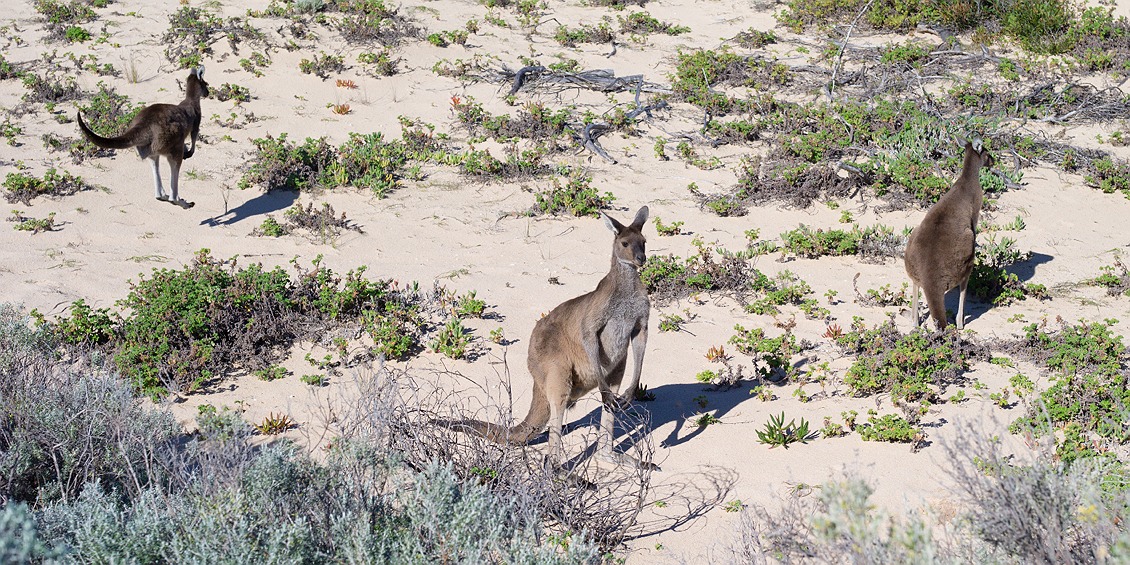 The image above is a scene that I stumbled upon while at the beach. I quickly focused on the kangaroo in the foreground. It was obvious to me that I had the kangaroo in focus because the background was glistening strongly in the micro-prism as the movements of my hands shifted the detail from one facet to another

When looking at a 100% crop, you can see the kangaroos insanely sharp details, contrasting to the slightly out of focus background. This was shot at f/9.5, had I known how accurate I could be with this I probably would have shot it with a much wider aperture for better subject isolation. 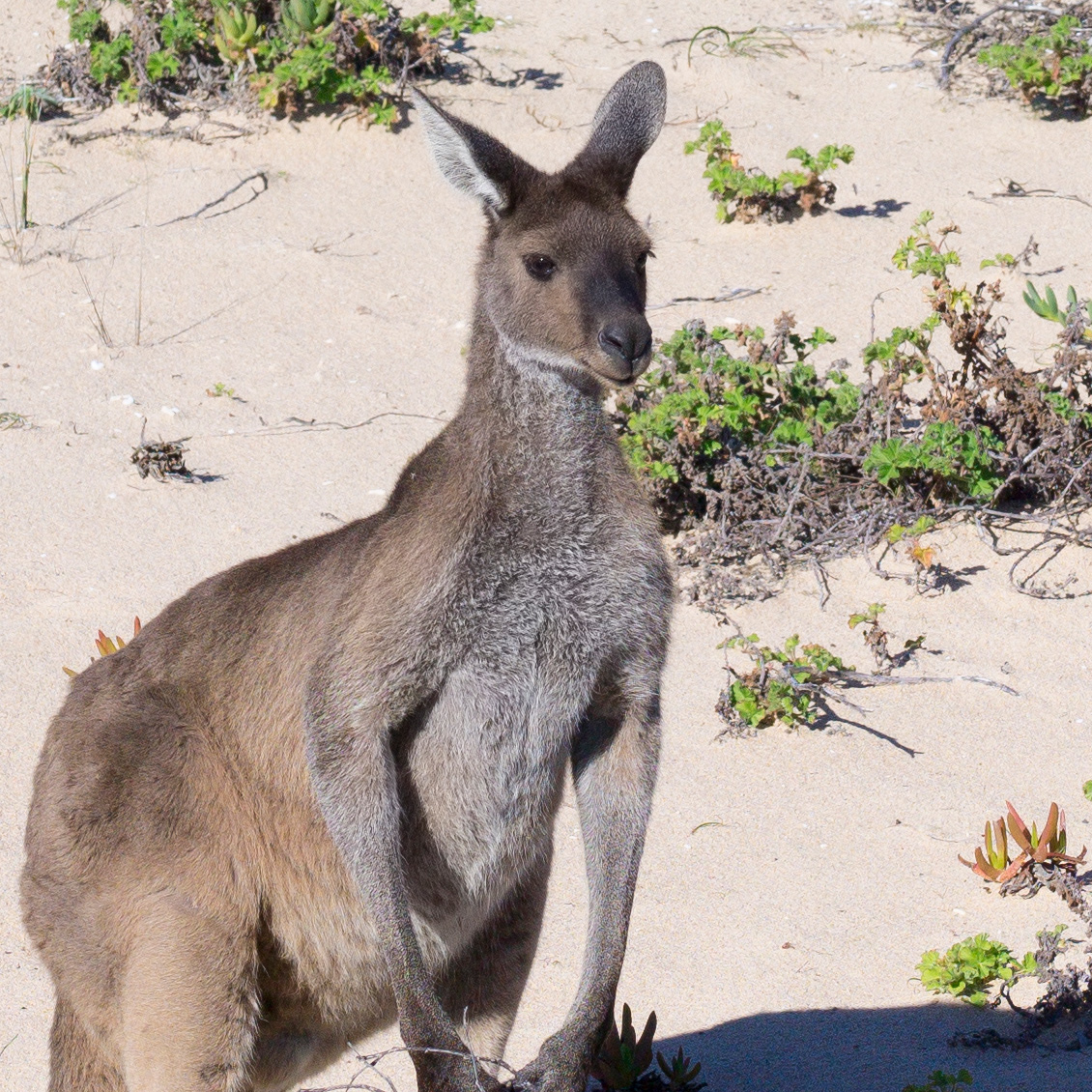 I recorded some video footage of what the view through the viewfinder looks like while in use. You can see various effects that the Microprism focusing screen produces, and the result of autofocus being used.

Here’s the setup I used to produce the video. 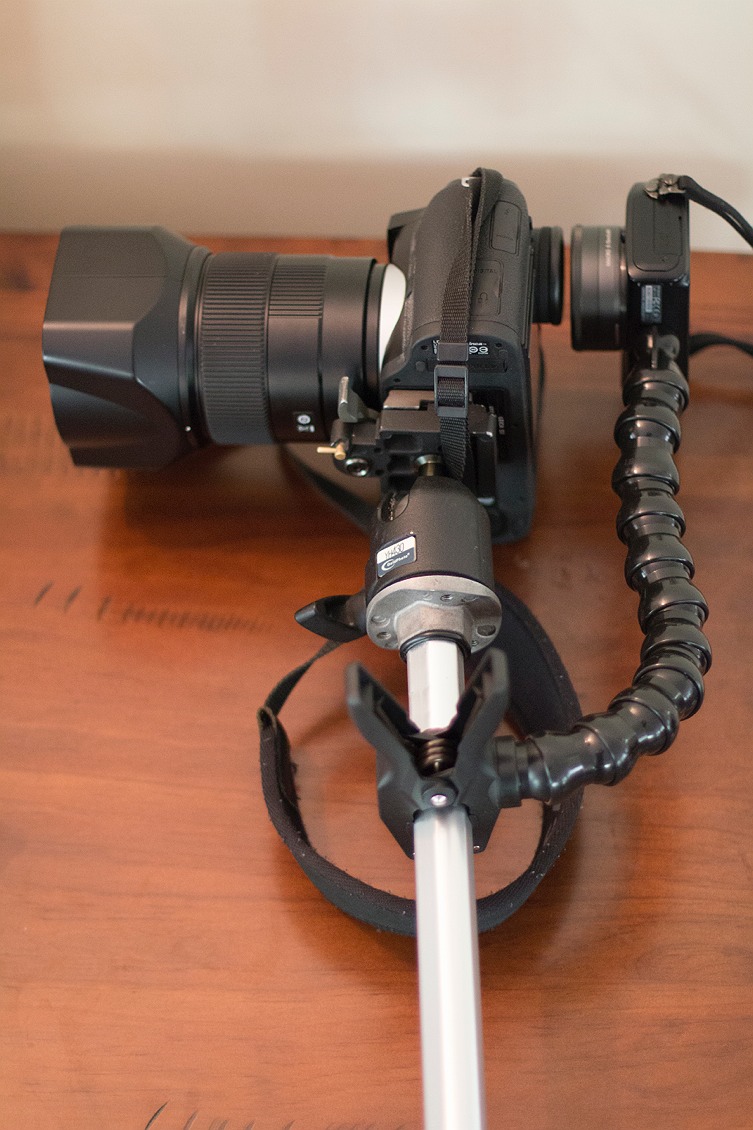